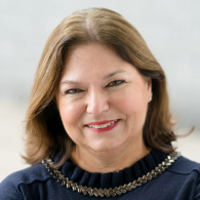 Some people are just born to teach.

While political fundraising paid her bills for the early part of her career, Nancy Bocskor has been teaching people how to be better at what they love since her days in 4-H. Surprisingly, her political aspirations go back even further. Professor Bocskor helped her first client “win” in 1964 at age 7 when she organized “Second Graders for Goldwater” at her elementary school. Bocskor loves to say with a laugh, “one of the few places where Barry Goldwater won was my school.” She had no idea that such a victory would inspire the rest of her life.

After graduating from Otterbein University in Westerville, Ohio, Bocskor landed her first job with then-freshman congressman Newt Gingrich of Georgia, first as a legislative correspondent. She ended up being his legislative director by age 23. But the siren call of politics pulled her back into party politics rather than public policy.

During her political career, Bocskor has worked at all three major Republican Party committees. Her role as deputy communications director at the Republican Senatorial Committee ultimately landed her in Nebraska, where she worked as a press secretary to a U.S. Senate candidate. She was then recruited to serve as the executive director of the Nebraska Republican Party. “You have to leave the D.C. bubble to break the glass ceiling in politics — something a lot of young women are hesitant to do,” Bocskor said.

After her “sabbatical” in Nebraska, Bocskor returned to Washington as an account executive at a political ad agency. Then the call happened: she became one of the youngest female chiefs-of-staff on Capitol Hill at age 31. However, she recognized she missed the energy of political campaigning.

In 1990, Bocskor started the Nancy Bocskor Company, where she worked with approximately half a dozen candidates in Nebraska. Then she received a call from her old boss, Gingrich, who had just been elected House minority whip and wanted Bocskor to help with fundraising. “You’ll ask anybody anything,” and, most importantly, “you’re pleasantly persistent,” Gingrich told her. It was Gingrich who would lead her into the world of political fundraising.

After 15 years of political fundraising, Bocskor was hungry for something new. She accepted a contract working in the Middle East training women interested in running for parliament. She again returned to “Newt World” — “you really never leave,” she adds — working to launch a project called American Solutions for the former speaker. She also began lecturing at George Washington’s Graduate School of Political Management. Returning to her roots — teaching people to be better at the things they’re passionate about — was a seamless and welcome transition.

Bocskor began teaching at George Washington in 2007 and just celebrated her 11th year at GSPM.

“There’s an old saying: You can’t save the world if you can’t pay the rent.” – Nancy Bocskor

While most students want to learn about creating television commercials, data analysis and polling, none of that matters if they can’t cover the costs. Offices, technology, staff, advertising materials and media buys, travel — the list of campaign costs goes on and on. Fundraising means the difference between getting your message out and finding yourself out of the race.

At GW, Bocskor’s “Fundraising and Budgeting” course covers raising money for political campaigns. It also addresses budgeting processes, standard controls to check expenditures, accounting procedures and general strategies for effective fundraising. While this course is taught as part of the political management program, most of the course materials can also be applied to nonprofit fundraising.

“My class focuses on political fundraising, but we also talk about nonprofit fundraising, because the lines are blurred,” Bocskor said. “Many people do fundraising for both types of organizations. So I make sure they really have a solid foundation in the field of fundraising.”

GSPM graduates work around the globe filling a variety of important roles. Alumni include elected officials in the national legislatures in Japan, Mexico and Slovakia; campaign managers for Romney for President and Sen. Joe Manchin (D-WV), chiefs of staff for Democratic and Republican U.S. senators and representatives, and key aides in both the Bush and Obama White House teams.

Bocskor seldom meets her online students face-to-face, much to her dismay. But she loves keeping in touch through modern technology. “You know Mark Zuckerberg invented Facebook so I could keep track of every person I know in the world,” Bocskor said.

“The best advice — politics is still personal. And that means you have to learn how to engage others,” Bocskor said.

Effective communication can be the make-it or break-it point for a lot of political campaign processes. But when you are asking people to donate their hard-earned dollars to support your candidate, you’d better come prepared. “We make sure you’re prepared at GSPM,” Bocskor said.

Beyond keeping track of her former students, Bocskor also likes to arrange meet-ups during her travels or invite them to return to guest lecture in her classes. She has found that during their time at GW, many students form a real bond with the school and faculty and are often eager to return and share their experiences in the real world of political management.

“My class focuses on political fundraising, but we also talk about nonprofit fundraising, because the lines are blurred. Many people do fundraising for both types of organizations. So I make sure they really have a solid foundation in the field of fundraising.”
– Nancy Bocskor, Adjunct Professor

Nancy Bocskor, tagged a “Democracy Coach” by a major German newspaper, teaches citizens in the United States and internationally how to communicate with passion to affect change in their communities.

Nancy Bocskor founded the Nancy Bocskor Company in 1990. She has raised money for more than 100 Members of Congress and candidates and has trained activists and leaders in all 50 states and more than 20 countries.

The author of “Go Fish: How to Catch (and Keep) Contributors: A Practical Guide to Fundraising,” Nancy is also a professor at George Washington University’s Graduate School of Political Management where she teaches both online and classroom fundraising courses. She also guides online students through their Practicum and Capstone Courses.

Nancy is on the board for Running Start, an organization that encourages young women to run for office and serves on the advisory board for the Center for Second Service, a program that trains veterans for public service. She also served on the board of the Women’s Campaign School at Yale for seven years, where she chaired the school’s Curriculum Committee for five years.

A graduate of Otterbein College in Westerville, Ohio, Nancy received the 2010 the Distinguished Alumni Award for “her passion to affect change in national and international communities, training and consulting with the nation’s and world’s political leaders, and commitment to educate others, particularly women, around the world.”

Nancy Bocskor spreads democracy throughout the world…..the lively American travels from one country to the next coaching candidates on how to win elections, especially encouraging women to make it into parliament.

Go Fish: How to Catch (and Keep) Contributors: A Practical Guide to Fundraising

The Campaign School Manual (a training manual for volunteers, campaign workers and candidates for the National Federation of Republican Women)