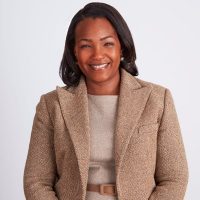 From startups to Avon

Yanique Woodall’s first venture into the PR industry was with a small firm called CS Marketing based out of New York City, which boasted a roster of promotional clients, including restaurants and startup businesses. That experience taught her a number of things. In addition to learning how to create a marketing program, she also learned how to be extremely creative, since most of the businesses she worked with were on a shoestring budget. Most of all, she learned how public relations could be integrated into any marketing program.

From there, Woodall went to another small firm in New Jersey called Rachel Litner Associates, which worked on consumer products. There, she learned the beauty of developing communications plans focused on today’s consumer. Woodall says, “It was more than just making sure that your product was on the page, but also how do you tell the story around the product.” That was also her first experience focusing on female consumers and their buying habits and thought processes. After other stops, Woodall landed her first corporate role with Avon Products, Inc.

Woodall explains, “Avon was my first push with retail PR — that’s where all of the magic and excitement worked for me, and that’s really where I began my retail experience.” Although Avon is a direct sales company, at the time Woodall joined it was doing its first retail venture in department stores, including JCPenney and Sears. Woodall was lucky enough to work on that initiative. As a PR executive for a Fortune 50 company, she’s seen the industry change dramatically over the years, from a shortened news cycle and fake news to online shopping and social media — all of which can have a dramatic effect on a company’s brand.

“The pivotal moment for me was understanding how communications wasn’t this siloed division within an organization, it was something that needed to be woven into many facets of the organization,” Woodall said.

Growing up, Woodall wanted to be a TV news reporter. She even entered Hofstra University with that as her planned career path. But then she met a fantastic professor who told her about public relations. Woodall explains, “She told me: yes, reporting in front of the camera is important, but did you know that it’s even more important to be able to build that story and arm someone to be able to tell it effectively?”

Although Hofstra University didn’t have a public relations program at the time, Woodall and one other student would meet in that professor’s office at 8 a.m. every morning for “independent studies” to learn about public relations.

When Woodall got to Avon Products, Inc., that same professor contacted her and asked if she would like to teach. Woodall was working 14-hour days, so she knew she couldn’t. But one day she mentioned it to her direct supervisor, who told her to do it — that they could work out the scheduling details. Woodall says, “My supervisor told me, ‘Manage your day. You’re a strong manager. I know you’re an advocate for education — you talk about it all the time. Try it out, and we’ll work the rest out later.’” So she did.

It turns out Hofstra University was as happy with the arrangement as she was. “During that first semester I had a chance to apply everything I was learning in real time and bring it back to the classroom,” Woodall said. “It did two things: one, it brought the lesson plans to life for the students, and two, it was a little bit of a therapy session for me, because, depending on how the day was going, it was really good to have 30 to 40 people to tell about it. It was absolutely fantastic.”

Then, in 2009, Woodall was speaking at a PR news event in Washington, D.C., and was approached by a professor from George Washington University. He had just heard her talk on crisis communications and brand reputation within digital communications, and asked if she’d be interested in sharing those thoughts with his classroom. Woodall says, “I told him I would love to, but I’m so sorry, I live in New York. And he said that’s OK, we have an online program, and then we began to speak and started to build things together, and magic happened.”

The main course Woodall focuses on right now at George Washington University is Introduction to Marketing Communications. She tells us,“My expectation when they’re coming into my course is that, at this point, they have a strong understanding of how a corporation is run, and that they really want to understand how marketing and communications intersect. And when
those two intersect, how it affects today’s consumer.”

She adds, “I think it’s important for anyone who’s entering PR, or anyone who is furthering their profession in PR, to understand that this is not a spin master role. It never has been, and especially with today’s consumers and society, it’s definitely not. With the rise of fake news and the fact that news can travel very quickly, transparency is important. So, when you enter this profession, you have to be prepared to be able to see the story, build the story and protect the brand.”

Woodall does have some advice for those looking to enter the communications program at George Washington University. “Don’t be afraid to reach out to the professors. They’re very open to speaking to potential students. Learn a little bit more about their background and ask them questions, even if it’s by email. It’s important to know who’s going to be leading you —and I think professors like that.”

Yanique Griffin-Woodall is Vice President, Enterprise Public Relations at 1-800-FLOWERS.COM. She is responsible for leading the enterprise public relations division and external agencies in strategic integration of consumer communications programs to support 1-800-FLOWERS.COM and its subsidiaries.

She leads the public relations strategy and execution for business-to-business and trade focused programs, is responsible for global reputation management strategy and serves as the senior communications advisor as part of the Leadership Team.

Previously, she worked for Avon Products, Inc., and was responsible for the marketing and communications for the company’s flagship and first retail venture in New York City. Woodall was also senior manager, corporate communications group at Fujifilm, USA, Inc.