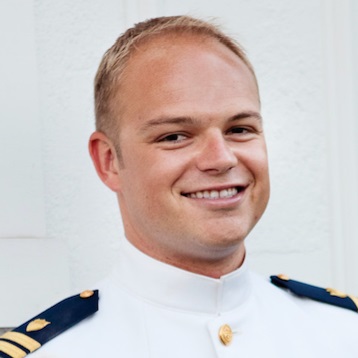 Laying the Foundation for Success
Like so many Americans, Brendan McKinnon felt compelled to serve his country following the Sept. 11, 2001, terror attacks. However, in recent years Brendan’s brand of uncommon valor has turned into a spirited pursuit of justice which has taken him to a different type of battlefield.

Being raised in a family with strong military ties may help to explain his enthusiasm for the law, but a strong interest in public relations and foreign policy are what helped shape his career. Still, the image of a nation under siege is what launched him into action to help make the world a safer place.

“Up until that point, I was focused on entering the Naval Academy in Annapolis,” Brendan said. “But after 9/11, I felt that if there was going to be a war, the enemy might try something like that again. For me, I knew that the Coast Guard would provide a better opportunity to try and prevent the next attack from happening, with an option to serve overseas if I needed to.”

Upon graduating from the Coast Guard Academy, Brendan served 10 years of active duty, ultimately advancing to the rank of lieutenant. Most of his active years were spent intercepting drug trafficking and human smuggling operations in the Caribbean and Eastern Pacific regions, with frequent transit through the Panama Canal.

Ship to Shore Communications
During his active duty period, Brendan sought ways to coordinate his Coast Guard duties with a continued interest in public policy initiatives. “Public affairs really stood out to me,” Brendan said. “It was a staff specialty that would allow me to continue sea operations, stay connected to mission objectives and more or less help tell our story the right way.”

That’s when Brendan discovered the online master’s in strategic public relations from the College of Professional Studies at George Washington University. In addition to an outstanding reputation and vast alumni network, the balanced structure of this three-year program offered him the flexibility to pursue his studies while deployed to the Caribbean and Europe.

“I was really impressed how much the program was within the political management school,” Brendan said. “A lot of the other programs I looked at viewed it as a subset of communication. With GW having it in political management, it was more about policy, legislation and how they all interact together.”

Real-World Education That Makes a Difference
The level of interaction with classmates and the instructional staff at GW helped Brendan get the most out of his distance learning experience. “There was never a point where I felt different as an online student,” Brendan said. “The program encouraged us to really talk to each other, stay involved and reach out for support whenever needed.”

This spirit of collaboration culminated with a two-semester Capstone Project. Brendan, along with four classmates, developed a public relations program that explored ways for the NFL to deal with CTE and other game-related health risks associated with force
and impact.

“That was in May 2013,” Brendan said. “Here we are five years later, and it’s still one of the biggest PR issues that the NFL — and professional sports in general — is facing today. Looking back in hindsight, it feels like we were so far ahead of the curve. We could have really made a difference if someone had listened to us.”

Continued Dedication to Public Policy Initiatives
Brendan graduated from GW in 2013 with a Master’s in Strategic Public Relations. However, even after accomplishing such an amazing feat, he still wasn’t quite finished navigating his career arc. He understood that to perform the serious policy work that is his true calling, he would need to go to law school and add a juris doctor to his skill set.

“My plan was always to go to law school after the Coast Guard,” Brendan said. “But I think the experience in the GW program solidified that and helped me focus on what I wanted to do and why. The time management skills learned from GW definitely prepared me to manage the law school workload and left me better prepared to balance work, family and social life.”

“One of the things that really attracted me to the GW program was that it was in the political management school, and there was a focus not just on public relations, but on how public relations interacts with public policy. I always knew that when I got out of the service, I wanted to do something policy related.”