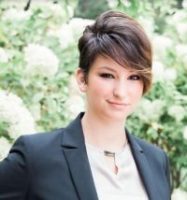 “As I looked more into political programs, the GW program came up, and I thought, this is phenomenal — this is exactly what I want to do,” she said.

Beyond the curriculum, Cassie was looking for a high-ranked school with an exemplary reputation that offered real-world experience as well as academic knowledge. She wanted to learn from those who had already done it, not just people who taught theory. GW’s online political management program provided just that.

“Being a veteran, there’s already an inherent passion and a need to serve others,” Cassie said. “And I realized that this degree was the next step in teaching me how to continue to serve the public in the civilian sector.”

Taking her dedication to public service one step further, Cassie is currently running for office in the 50th District for the Ohio House
of Representatives.

Creating a Path to Accomplishing Future Goals
When Cassie began to consider running for political office, she studied the candidates in her field. While they were all good candidates, one thing became clear to her: Just expressing your position on policies is not enough. She believed that, in order to be truly successful and deliver on campaign promises, she would need a better understanding of political processes and leadership strategies,” she said.”

“You need to have the ability to conduct opposition research, manage money, fundraise, budget, to develop your messaging and your strategies. So it’s not enough to just be a great candidate — you also have to be a great leader.”

One of the program differentiators she liked was the optional residency in Washington, D.C. Because she was looking for an in-depth, hands-on educational experience, this additional opportunity provided much-appreciated exposure and interaction with political consultants, advocacy specialists, elected officials and applied researchers — which she considered invaluable.

“The Honorable Bob Carr gave us a tour of the Capitol, providing a first-class exploration of the environments where important political decisions are made every day,” she said. “These were places I’d only seen on TV before, but now they feel familiar.”

A Natural Progression for Veterans
“This degree enabled me to take all the skills that I have acquired in the military and refine them to continue my path in public service,” Cassie said.

In Cassie’s well-informed opinion, those who have served have an inherent passion and need to serve others, even after their military service is complete. She felt that earning her Master’s in Political Management from GW was the next natural progression in her career. Living in Ohio made it impossible for Cassie to pursue a campus program at GW, but the online program was an achievable option for her, even though she was a little worried about earning her degree online.

“I was worried that not being able to meet face-to-face with my professors was going to make it more difficult,” she said. “But they’re available — they’re one email away, and they respond almost immediately. They really blew me away with how accessible and available they were when you needed something.”

Cassie also believes that “most veterans are well-prepared to take an online course, or an online degree, even if they think they’re not.” This is because veterans generally have the self-discipline and the ability to juggle multiple tasks like working, studying and remaining connected to their families.

Initial Outcomes
Cassie graduated just last year, but she has already experienced professional growth. Beyond feeling more capable in her mediation role, she also has become a professor at Aultman College since completing the political management program. And her decision to run for public office was solidified by her fellow students and professors.

“During my coursework, Caren Turner and Ginny Ainsley, two of my professors, really inspired me and pushed me to run for office,” she said.

Overall, Cassie would recommend GW’s online programs to anyone seeking to play a larger role in politics — veteran or civilian. The most important differentiator of GW’s political management program, according to Cassie, is experiential access to the real-world practice of political management, not just the theoretical exploration offered by many other programs.

“I think more people should know about this program,” she said, “because I feel like there are a lot of people who get degrees with a theoretical approach, whereas this degree is teaching you the real-world practice and application of political management skills.”

“I think more people should know about this program … this degree is teaching you the real-world practice and application of political management skills.”