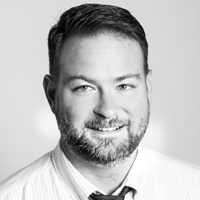 BEYOND THEORY TO APPLICATION

Cory Brown noticed early in his research that the George Washington University’s Master’s in Political Management curriculum focused on engagement using the theory of political science to discover new approaches to political action, which set it apart from many others. “Every other master’s program was practically ‘Political Science, Part Two’ so it was all very academic and very theoretical,” Cory said. “I didn’t want that traditional, theoretical, academic-only kind of setting.”

For Cory, the program’s appeal was its practical application. Where political science teaches the theories about why campaigns, causes, and policy implementation succeed or fail, GW’s political management program taught Cory how to engage and win in these arenas.

Cory also liked that the program was taught by practitioners with experience in the industry. “You’re going to get really good instructions from people who are actually doing the work,” he said.

Working as a pollster, Cory first saw the power of the skills he had learned in action. When one congressional candidate won a landslide victory, hardly anyone in Alabama could believe it — except Cory and his polling team. They had predicted the exact margin of victory a few days prior to the election.

Cory deals in informed decisions. From his days as a cavalry scout in Iraq with the U.S. Army to his current role as vice president of data and strategy at a Washington, D.C., communication firm, Cory has mastered the art of being informed. That’s why when he considered pursuing an advanced degree, the George Washington University’s Master’s in Political Management caught his attention.

The path to success isn’t always direct. Just ask Cory. From growing up in Alabama to serving in Iraq and then working in our nation’s capital, Cory has used his experience and knowledge to pursue action across the globe. At many universities, earning an advanced degree would mean putting his military service abroad and professional aspirations on hold. With GW, Cory was able to start his degree on campus, serve in Iraq and return to complete his program fully online without missing a beat.

AT THE CENTER OF IT ALL

After graduation, Cory put his newfound expertise to work right at the center of U.S. politics in Washington, D.C. Today, he manages polling operations and voter outreach with Cygnal, a data-driven communication and campaign firm, and helps the next generation of political experts reach their goals as an adjunct professor at GW.

Cory said he still benefits from the school’s vast alumni network and the connections he made through the program.

“The Master’s in Political Management is an investment, but it’s very worthwhile. You’re getting a very practical experience from the teachers in the program that no other university can match. [GW] did a good job of making you feel as connected virtually as you were in an on-campus class.”