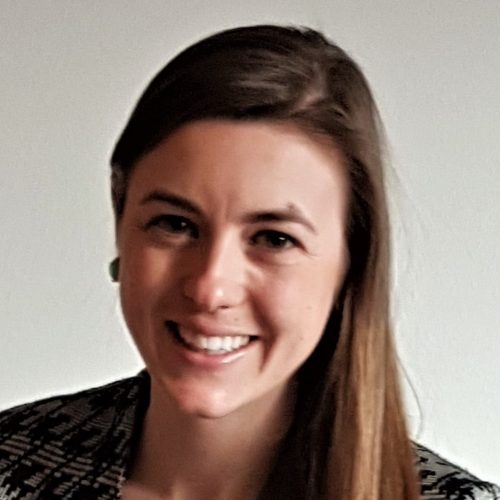 Applying PR Theory in Real-World Practice
For Desiree Dillehay, communication is about more than simple strategy, numbers or audience demographics. It takes on a much deeper significance — helping to connect individuals, inform the public and engage an open, honest dialogue that builds mutual trust and respect.

After earning her undergraduate degree from the University of Minnesota, the future was wide open for Desiree, but also full of twists and turns. A career track primed for the publishing industry suddenly shifted toward marketing and public relations, the latter of which she would fully embrace during her time spent in the U.S. Army.

“In college, I didn’t necessarily enjoy what I was studying and was looking for something a bit more challenging,” Desiree said. “A lot of my family has already served in the military. I decided to join because I wanted to do something that reflected my family values, and the Army National Guard allowed me to be in school and still serve my country.”
to follow.

Making the Most of Every Opportunity
After basic training, Desiree served three years of enlistment before attending Officer Candidate School in Fort Benning, Ga. However, with so many opportunities and areas of specialization to choose from, she was able to sample from different career options until finding one she felt most comfortable with.

“I went from an adjutant general (human resources officer) to a public affairs officer,” Desiree said. “I was able to attend the Defense Information School right away and from there, I became a civilian within the Department of the Army. It was here that I discovered the many different types of networking opportunities available.”

Around this time, Desiree realized that she could elevate her career standing even further by pursuing a master’s degree. However, the logistics of deployment and an unforgiving duty schedule made her situation more complicated than for most. The solution soon became clear.

“It’s a little more difficult with an online program, not being there in person,” she said. “But at the same time everyone’s been very receptive, whether it’s asking a classmate for advice or peer review, or if you’re looking to get constructive feedback. Overall, the interaction has been fantastic.”

Paying It Forward to the Next Generation
Having completed her coursework in late 2018, Desiree is scheduled for commencement in May 2019. Despite encountering issues which could have tripped up others, Desiree accepted the challenge and found a way to triumph.

“For the most part, I’ve been able to engage in projects that relate closely to the public affairs offices that I work with on a daily basis,” Desiree added. “As a command information chief, the way that I interact with the community through social media and other management platforms has certainly been influenced in a more positive direction.”

Without a doubt, 11 years of dedicated military service has certainly laid the foundation for a focused and productive career. However, Desiree also acknowledges and appreciates the opportunities created by the online learning experience at GW. She’s also quick to encourage others to stay the course in pursuit of their own dreams.

“Don’t give up,” Desiree said. “There are some moments in the program where you may not necessarily know how it relates to your career, but eventually those moments become part of a well-rounded package. Whether you think you know the information already or not, there’s always something you can learn from and grow.”

“At GW, I was impressed by the materials and multimedia approach that my professors took. I always considered PR more of a humanities or art-focused field, but my coursework introduced a whole other analytical side to it. I was pleasantly surprised by how interesting and relevant the finance course was to my field of work.”