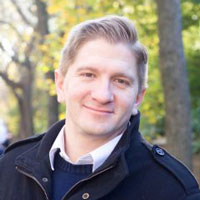 LEARNING TO HARNESS THE POWER OF PR

Devin Knighton always knew PR could help shape an image, sell a product, or manage a crisis. But it was when he used it to help a friend
in need that he learned public relations could be so much more.

Fresh out of college, Devin was working for a technology startup when he learned a friend had been paralyzed in a snowboarding accident. Soon the victim’s friends came up with an idea for a neighborhood yard sale to help raise money for the family, and Devin was asked to use his budding PR skills to spread the word.

“We were fortunate enough to get media coverage for three days during the yard sale, and as a result the neighborhood generated $20,000 in sales,” Devin said. “But what was interesting was $8,000 came from those who’d seen the news coverage. So early in my career I saw that the power of the media could make a big difference.”

Devin’s focus turned to finding a way to help connect society and business. Strategy, he said, is an overused word. Instead he prefers
to describe his approach to PR as a way of “assessing the needs of an organization and the needs of society and figuring out where
they intersect.”

He found success using tried and true PR principles such as developing relationships and working the media, but he still wanted a role that
would allow him to showcase his conceptual abilities. That’s when he started seriously considering going back to school. Like anyone facing
a big decision, Devin sought his mentor’s advice.

PREPARING FOR A POSITION OF TRUST

The executive helped explain further that a Chief Communications Officer was a trusted advisor whose role was beyond having “a massive budget with lots of employees and being under constant pressure to generate enough leads for a sales team and hit numbers” as would a CMO.

Devin wanted to be that trusted advisor as described by his mentor. He wanted to work with employees, investors, executives, customers, and
partners alike. That meant pursuing his Master’s in Strategic Public Relations. After searching for programs in his home state of Utah and online, he chose the George Washington University for its prestige, flexibility, and curriculum.

WORKING TO REALIZE HIS DREAMS

At the time of his enrollment, Devin had two children, with another on the way. With GW online, he could be home with his growing family. It was a time he called “chaotic,” but he soon learned to schedule study days and family days, balance work and school, and increase
his productivity professionally.

“There is always a reason to delay starting a program, but there’s also a reason to get going,” he said. “Start workingnow to realize your dreams. It will always require sacrifice and be difficult, but in the end you’ll be glad.”

Devin certainly is. Shortly after graduating with his Master’s in Strategic Public Relations from GW in 2010, he was hired as Director of PR for a private technology company. He stayed with the company through its IPO in November 2015.

“I don’t think I would have been able to do nearly as much for this company, or provide as much value if I hadn’t gotten my master’s from GW,” Devin said.

“I was talking with a mentor about my career and I asked, ‘should I go for an MBA or a Master’s in Public Relations?’” Devin said. “’Would you rather end up as Chief Marketing Officer or Chief Communications Officer?’ he asked. ‘As a CCO you’ll have a smaller team, but you will be a trusted advisor to other executives. You’ll help them make strategicareas of the business'” – Devin Knighton