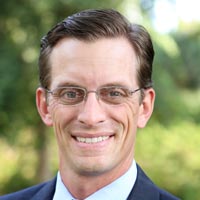 “With PR, you have to be prepared for anything,” says Justin Evans, 2016 graduate of the online Master of Professional Studies in Strategic Public Relations program from George Washington University. “At the last second everything can change and you have to start all over again.”

For Justin, being ready for unexpected curves in the road doesn’t just apply to public relations as a profession, but also the decade-long journey the field has taken him on. It’s a career path that has included everything from working alongside three state governors to his current role at the largest privately-held software company in the world.

“It was sort of an accident how I got into PR,” Justin says. “I was on track to go to law school, but I was fortunate to be appointed to a role in Gov. Mark Sanford’s office as the Environmental Policies Advisor after graduating Clemson University with a political science degree.”

“Dealing with things like the South Carolina General Assembly on a daily basis required me to have a deeper understanding of public relations and how to effectively create and communicate a message to a broad audience. As a result of that experience, I signed up to get my master’s in strategic public relations through George Washington University.”

Justin continued working while in the graduate program, and was able to apply his education to his changing roles as a communicator. This included a two-year stint as the Director of Intergovernmental Relations and Communications with the office of the State Treasurer, before bring recruited in to a sales position with SAS — where he helps government agencies navigate the world of big data and analytics.

“As the South Carolina Senior Account Executive, it is my job to be the liaison between the state government and the SAS institute,” he says. “I help educate state agencies on our software, and work with elected officials and bureaucrats on implementing new software packages aimed at using analytics to drive decision-making.”

“My PR background is helpful because in the world of selling software to government you have to be able to make the pitch relevant to what they’re trying to do. You have to know what their initiatives are and how to deliver the right message to the right people. You have to be agile.”

Being able to quickly pivot seems to have never been a problem for Justin, whose varied career is a reminder of how important good communication skills can be across all fields. Looking back on his unique path, he cites the curriculum and online flexibility of the strategic public relations master’s program for helping him continue to develop as an effective communicator and prepare for whatever challenges come next.

“There are a million choices for online education, but a lot of times you’re sacrificing quality,” he says. “There was no sacrifice in the quality of the education from George Washington University. The rigor and the course material was just as challenging and just as in-depth as it would have been had I been on campus, and it gave me the ability to continue working.”

“That was so important because there was an intersection between what I did in school and what I was doing in the real world. The program gave me more confidence in being able to react in a quick and timely fashion as things change. It also made me a better account executive, and I feel better prepared than my competition to adapt to changing political winds and develop the messaging I need to go along with it.”