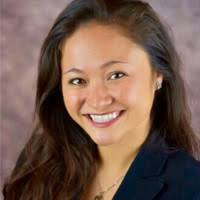 Into the Wild Blue Yonder and Beyond
Megumi Voight understands the importance of accurately representing and portraying events. She’s always shown interest in foreign policy initiatives, evidenced by her participation in Model United Nations in high school. Eventually, her career took a fortunate turn that would provide the foundation for her ambition.

“I received a call from the women’s tennis coach at the United States Air Force Academy,” Megumi said. “I was recruited by them, and after going on a campus visit I said, ‘This is home; this is what I want to do.’”

With firm resolve, Megumi entered Basic Cadet Training prior to her studies at the Air Force Academy, where she earned a degree in Foreign Area Studies in 2012. Upon graduation and her commission as a Second Lieutenant in the U.S. Air Force, she would embark on a career defined by commitment and dedication over the course of five and a half years of active duty.

During her active duty time as a Public Affairs Officer for the Air Force, Megumi visited dozens of countries on a multitude of missions, gaining valuable insight and experience from a global perspective.

However, to better understand public relations through the lens of other industries, Megumi decided to take the necessary steps to broaden her perspective. “I knew I always wanted to get a postgrad degree,” Megumi said. “But the longer you wait, the more difficult it becomes to balance school with a career, family and other important aspects of life.”

Valuable PR Insight and Experience
Realizing that she wanted to continue in public relations, Megumi decided to apply the same skills and passion learned throughout her military service to the private sector. However, as an active duty Airman, her pursuit of higher education would require flexibility and coordination.

“I began searching for programs that had online or distance learning options,” she said. “I was stationed at remote locations and didn’t know if I was going to deploy or not, which is a reality for those serving in the military.” After intense research and planning, Megumi decided to pursue her online master’s degree at the George Washington University.

One thing that impressed Megumi about GW was how the faculty and instructional staff were true professionals, bringing a wealth of knowledge and experience. “It wasn’t that they had simply built their careers in a lecture hall,” she said. “Many had backgrounds in corporate communications or government positions and applied real-life lessons learned into their teachings.”

Making the Transition and Charting a Path Toward the Future
After completing the necessary course requirements, Megumi was selected to appear in-person at graduation as the student commencement speaker. “For an online student to be chosen is incredible,” Megumi said. “Representing the entire Graduate School of Political Management on and off campus is something I’m very humbled by and will never forget.”

Megumi currently leads executive communications for Azure Global — the Microsoft organization responsible for global expansion of the cloud. After reflecting upon her own experience, she’s quick to encourage others toward their own educational and career goals.

“The return on investment pays dividends just in opening your mind and exposing it to everything that you can use to develop your skill set,” Megumi said. “Invest in you. For those who have served in the military, we’ve spent our whole careers serving others; it’s OK to take the time to serve yourself.”

“I knew that I wanted to pursue a master’s — it was just a matter of when. After searching for the best programs in public relations, the GW Graduate School of Political Management was always at the top of the list, and it’s a Yellow Ribbon School. I’ve always wanted to be a part of that network and it just made sense; it was actually the only program that I applied to.”