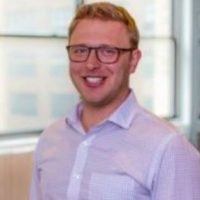 Making an Impact in Communications

Sometimes you have to take a leap of faith when pursuing your passion. That’s exactly what Michael Rohn, a 2016 George Washington graduate and marketing and communications manager with the Coaching Corps, did after discovering his passion for politics. He cut his teeth volunteering on local campaigns and interning with a political consulting company.

Driven by his desire for making the world a better place, he moved to Washington, D.C., shortly after graduating and started working on Capitol Hill.

“I wanted to make sure that the work that I’m doing has a larger impact on the world,” he says.

The same fervor that propelled Michael’s move to Washington, D.C., also inspired his decision to pursue a master’s degree in political management. He wanted to strengthen his knowledge of the various roles and aspects of politics, campaigning and messaging.

Michael was living in D.C. when he started going to informational sessions and meeting graduates of George Washington University who spoke highly of their experience.

“There’s a lot of political science programs, but the emphasis on the practical really jumped out at me. You’re not learning theories or conceptual ideas, you’re learning things that you’ll actually implement in your day-to-day,” he says. “And you’re learning them from professionals, not professors, which is really awesome.”

Michael started the program on-campus, but then a job opportunity took him to New York and then California. Luckily, he was able to switch to the online program. He describes the process as a “seamless transition.”

“I was surprised by how much interaction I had with the other classmates, which I think made it a better experience,” he says. “It was great that it incorporated group projects and class discussions for a more interactive experience.”

The curriculum offered classes in qualitative research as well as fundraising theories. He credits his ability to understand the ideas behind surveys and qualitative methods for making him better at his job.

“You’re going to learn a lot, you’re going to grow your skills and you’re going to get more opportunities because of that. The job market is just so competitive, and everyone has great work histories. But if you have this amazing master’s degree from this recognized top school, it really separates you.”