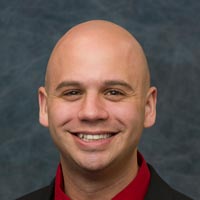 Public Affairs for the National Guard

Sometimes a single moment can set the course for the rest of your life. For Nathan Rivard, a chance conversation with a National Guard recruiter in high school would kick off a career in public affairs that’s entering its second decade.

“It’s funny how it all happened,” Nathan says. “I saw ‘broadcast journalist’ on the list of jobs the recruiter had, and he told me all the things you can go do in that role. I was just drawn to it. So essentially, getting my feet wet in the military started me off on this long career.”

Nathan is a 2016 graduate of George Washington University’s Master of Professional Studies in Strategic Public Relations online program, and has held a number of communications roles across different branches of the U.S. armed forces. His work has included producing video broadcasts, written news stories, interviews, photographs and other public-facing media to provide a behind-the-scenes look at the people and humanitarian efforts of our armed forces.

“I’ve had both small and larger-scale missions,” he says. “In 2015 I was in Africa where the Vermont National Guard was building a humanitarian demining training site with the Senegal army. I was performing media escort –– shooting home videos and photographs –– telling people back in the United States how we were helping them learn to perform demining throughout their own country.”

While he would go on to receive accolades for his projects, including being named the Air Force Communicator of the Year, Nathan shared that his proudest moments were when he was able to make a personal impact on the lives of those serving our country.

“While in the Army I got to do a story on a soldier who was an engineer and improving one of the bases,” Nathan says. “He’d been away from his family and hadn’t seen his daughter in probably five months. I got to interview him about his work, and he was able to send that video back home to show his daughter what daddy was doing, and why it’s important. Just the fact that it was able to have an impact on an individual and his family –– on a personal level that was great.”

Nathan was also able to fulfill his own goal of earning his graduate degree during his service. After researching different online programs, he chose to pursue strategic public relations with George Washington University.

“I still knew I wanted to continue my education,” he says. “I was at the point where I already finished an associate degree and a bachelor’s degree, so setting myself apart with a master’s was the logical next step. Everything that was in the George Washington curriculum related to my job, and I wanted to take it back to the workforce. I knew it would help me career-wise.”

“And I think the most memorable thing from taking the program was how diverse it was. There were people from different fields and at different places in their careers. So when we’d do video chats there were a lot of moments where you could learn from each other while sharing a public relations event or crisis that you had to deal with in the past. There was a lot of great advice coming in on what works and what doesn’t work in this industry.”

Since graduating in 2016, Nathan has used his experience and education to pursue his current role as public affairs deputy for the Vermont National Guard. The organization is headquartered in Colchester, VT, and comprises the state’s Army National Guard and Air National Guard. This latest opportunity has reaffirmed his long-ago decision to help provide a fresh perspective on those serving our country and allowed him to draw on the master’s education he chose to make a priority this far into a successful career.

“For me it was extremely beneficial,” he says. “The program gave me a lot of resources to draw upon in this role. Whatever happens now, I’m like ‘This is very similar to a case study that I worked on in the program.’ I feel like I have a better foundation to build off, and I can always reference something I already know from going through the program.”