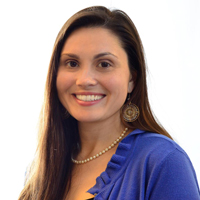 PR Master’s positions Sultana to become PRSA Chapter President
Sultana F. Ali got her start in marketing. She then leveraged years of mentoring students to become a high school teacher. She was passionate about teaching, but she continued to contemplate a return to the private sector. Then a volunteer opportunity led to her first PR job at a small Florida agency. She’s now president of the Washington, D.C., chapter of the Public Relations Society of America (PRSA).Although she calls her initial PR gig a “happy accident,” Sultana’s rise from volunteer to leader came from diligently extracting value from professional experiences throughout her 12-year PR career.When she was offered an entry-level job at a boutique PR agency, Sultana also had an offer to serve as a marketing director for a different company. After some consideration, she chose the agency. “I just had a feeling — even though it was a lesser title and lower salary — that I was stepping into a world that was going to suit me better, and where I could provide real value.”Once Sultana determined she was on the right career path, she sought an advanced degree to support her goals. That’s how she discovered George Washington University’s Master’s in Strategic Public Relations online program.

A proven conversation starter
For Sultana, a better tomorrow meant setting herself up for a specific future. She’d already served as spokeswoman for the Orange County Supervisor of Elections and met personal heroes like astronaut Buzz Aldrin while helping the Kennedy Space Center open a new attraction, “The Shuttle Launch Experience.”

But her heart was set on making the move to Washington, D.C., and working in the nonprofit sector. A pivotal conversation with an enrollment advisor gave her the confidence to follow through.

“I would definitely encourage anyone to contact an enrollment advisor, because when I did, we had a life-changing conversation about my future, discussing my personal and professional goals,” Sultana said. “I was a busy professional and very concerned with the time commitment. She really helped to allay my concerns and help me understand what it would take for me to manage the online coursework.”

“[The Daily Motivator author] Ralph Marston said, ‘What you do today can improve all your tomorrows,’” Sultana said. “Deciding to attain my higher education truly helped me improve all my tomorrows.”

Colleagues boost career confidence
Once the decision was made, Sultana found that the high level discussions held during GW’s online Master’s in Strategic Public Relations positively shifted her perspective. Faculty mentors also helped expand her versatility, especially during a project that helped convince her that higher aspirations might be within reach.

Suddenly, Sultana could see herself becoming a PR leader. “Real-life examples led to very robust conversations during one of the projects that we had to do, building out and designing a PR agency. I kind of looked at that and I said, ‘You know what, if I wanted to run an agency someday, I could do that now,’” Sultana said. Understanding agency operations encouraged her to think more strategically when working at an agency, earning her respect from leaders. Later on, it helped her manage outside agencies and vendors as an in-house PR leader.

From volunteer to nonprofit leader
After graduation, she relocated to D.C. There, she has worked at one of the largest PR agencies in the world and directed public relations for a publicly traded technology company. Now she serves as communications lead on consumer finance issues for an independent nonprofit organization.

While Sultana can point to certain courses of the online strategic public relations master’s degree that helped her develop particular skills, it was the sum of her time at GW that she credits with setting her up for greater success. Now she draws upon her education and experience to preside over PRSA’s largest chapter, PRSA-NCC.

“My experience at GW translated to something that catapulted my career forward, and now I’m proud to go to work every day knowing I’m making a difference working for one of the most respected nonprofits in the U.S.,” Sultana said