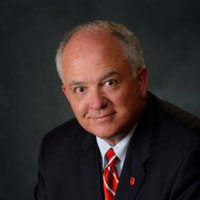 A practical approach to finding the right online degree was important to Thomas “Tom” E. Eppes. He knew he wanted a
flexible education, but he also was uncompromising about quality. He wasn’t interested in on-campus study, and also feared taking the
GRE after years removed from formal education. Most importantly, it was vital to him that the college he chose was respected and
would stand out to future employers. The George Washington University checked all his boxes.

THE PR MASTER BECOMES THE STUDENT

Some dreams require a leap of faith. For Tom, his rise to Chief Communications Officer at the University of Mississippi required several.

Early in his career, he hit the campaign trail as a Press Secretary on several races — work that abruptly ended when his candidates
lost. He even spontaneously accepted a position as director of communications for Days Inn America after a chance encounter with
the CEO on a plane. The directions a PR career can take can be far less unpredictable. Tom’s advice is to be prepared.

Fast forward 35 years. Tom was selling his own PR firm to a New York agency. A non-compete clause prevented him from doing similar work
in his area, but he was not ready to uproot his life. With time on his hands and an interest in teaching, Tom decided to pursue an online
Master’s in Strategic Public Relations.

Another pivot lay ahead, though. What Tom didn’t anticipate was that going back to school would lead him to an unexpected destination.

After earning his Master’s in Strategic Public Relations online, he discovered that many universities required a Ph.D. to serve as a full-time professor. Still bent on teaching, he enrolled in a doctorate program.

He had barely started studying when a new opportunity popped up that he couldn’t refuse.

“I completed one semester of doctoral study before being asked to join Ole Miss as Chief Communications Officer,” Tom said. “A graduate degree made a big difference in getting that job, and I’ve since seen many of the best university jobs, association jobs and even some corporate jobs require a master’s degree or strongly encourage one. No doubt, I wouldn’t be working here without it.”

“I have a longstanding interest in politics, where GW excels,” Tom said. “I love Washington, D.C. And the courses lined up perfectly with what I believe real-world public relations is all about, based on my 35 years in the business. It’s a very, very practical and highly beneficial curriculum for a practicing professional.”

“The reason I started work on a master’s was that I’d always enjoyed mentoring younger professionals, speaking at conferences and doing whatever I could to help others enter the profession or get better at it,” Tom said.