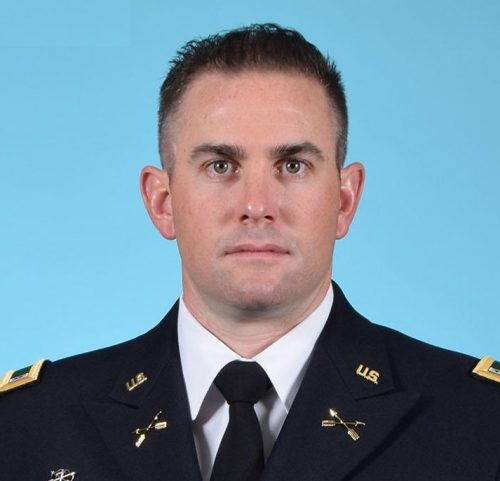 Preparing for the End of Service
Four months after graduating with his B.A. in Political Science from the University of Michigan, Travis Foley joined the military and embarked on an unexpectedly long military career.

His initial plan was to serve for only a few years, but after successfully completing Special Forces training, those few years quickly became 13. Now he plans to remain in the military until he is eligible for full retirement benefits after 20 years of service.

While he still has seven years of service remaining, Travis is working hard to prepare himself for life after the military.

“Warrant officers don’t get the same higher-level education opportunities that regular officers do,” Travis said. “We have to prepare ourselves.”

When Travis applied to George Washington University in 2015, he didn’t have a resume of civilian public service accomplishments and couldn’t discuss much of his work due to its classified status. Together with his enrollment specialist, Travis created a portfolio of his unclassified work to represent his career and his ability to thrive in the online political management program, and he was accepted.

Why Political Management?
“I’m just fascinated by campaign policy and advocacy, especially strategy,” Travis said. he has always been interested in politics. That’s why he earned his B.A. in Political Science before enlisting.

During his time in the service, he had several opportunities to employ his knowledge of politics and diplomacy. One instance he recalled involved a local tribal chief in northern Mali. Terrorist activity in the region had been reported, and was attempting to overthrow local government/tribal officials in a struggle to control the region. Travis and a few of his team members designed a ‘campaign strategy’ for the chief, based on the processes used by American political candidates. They were happy to later hear that their efforts had paid off, with the chief defeating the opposing candidate.

“Myself and another guy, we facilitated a campaign strategy for the tribal chief,” he said. Over a six-month period of time, we actually generated a campaign plan and strategy, and ultimately helped the chief win the election.”

Why GW?
“Being accepted to a prestigious institution with the reputation and credibility of GW was more than I could have ever asked for,” Travis said.

Reputation is very important to Travis. He was ready to go all-in to earn his master’s degree, but he expected a strong return on his investment. He knew that GW has a strong, historic reputation for excellence, which made it an easy decision for him. What Travis wasn’t expecting was the tremendous response from coworkers and superior officers when they discovered he’s earned his degree from GW.

“I don’t really do it a lot, but when I mention attending and graduating from GW, people are supremely impressed,” he said. They then go on to tell me what a great school GW is.”

GW Online vs. Campus-Based Education
Admittedly, Travis was unsure about pursuing his education online. But as an active-duty member of the armed services, he really had no other choice. So he put his faith in GW and its reputation, and he took the plunge.

“For a while, I was actually really against it,” he said. I was kind of all about brick-and-mortar education, being able to interact with people. But what I was surprised about was actually how much you learn from other students online as opposed to if you are in a brick-and-mortar institution.”

Travis enjoyed the camaraderie and depth of knowledge acquired through class discussions and peer reviewing assignments. Maybe it was the anonymity of the online structure, but his classmates seemed more open about sharing their practical experiences relating to course topics and expressing their opinions on what works and what doesn’t in the real world.

“I honestly thought that was a better platform with the online education as opposed to in the classroom,” he said. “I also think the course schedule and workload is set up pretty well for somebody who works full time — as long as you block off time for your studies, not just try to fit them into your life.”

“Being accepted to a prestigious institution with the reputation and credibility of GW was more than I could have ever asked for.”